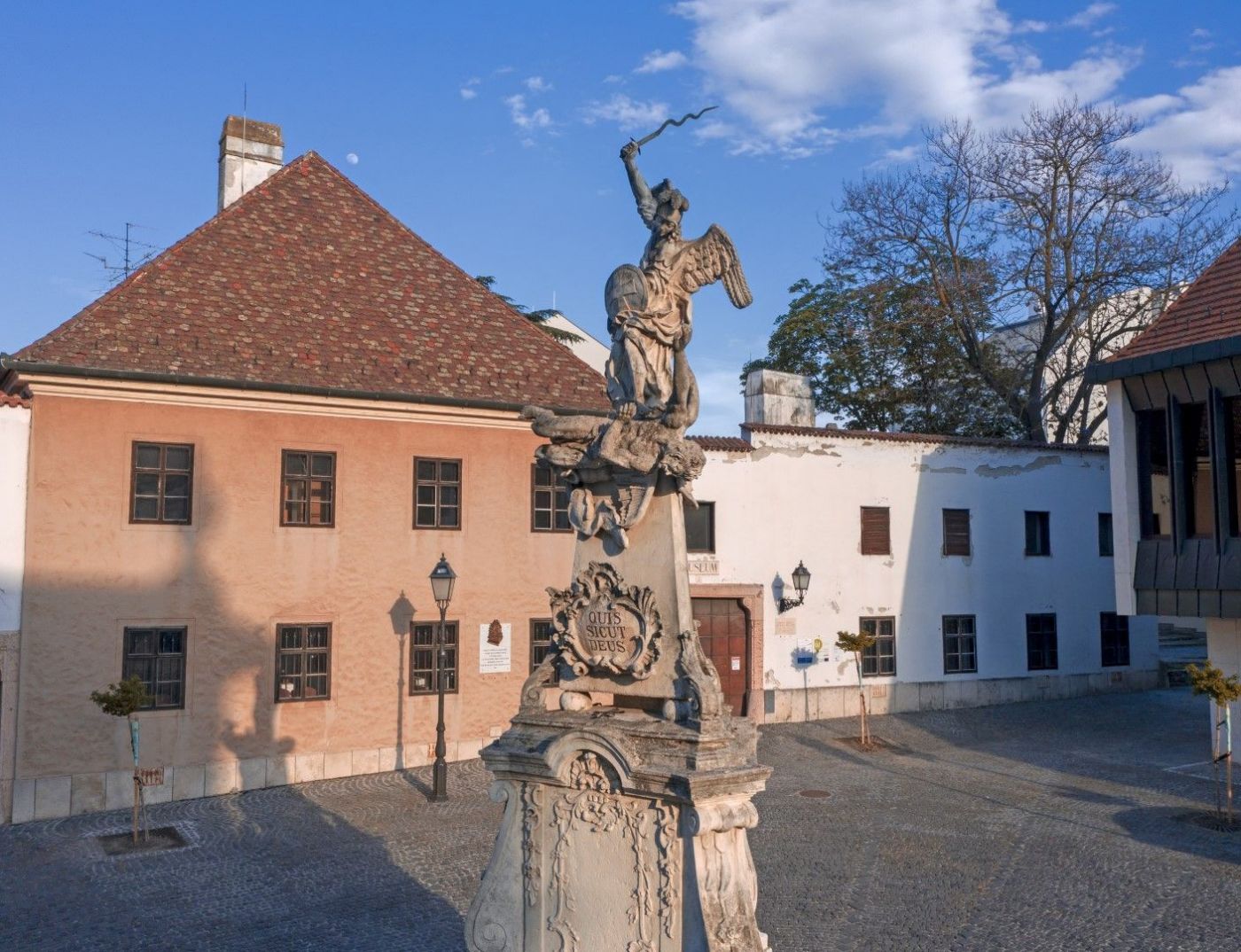 The statue next to the Cathedral is 8 meters tall and it proclaims the eternal lesson that ice cream always licks back.

The “ice cream” in this case means the deal with the Devil for profit.

We can thank the statue for the story of a conspiracy and the revealing of it. The cabal had 6 members, not 7 as real evil does, so maybe this could be the cause of the failure.

Legends tend to reach over the borders of reality, but this story is about the talks that were had during the contentious procedure that can be found in documents of the archives.

The starter of this was István Seregély who was a rich man. He had a house in Győrújváros and a property in Enese and he had boats on the Danube that were grain suppliers.

He needed more and he must have been desperate since he used this method to get more wealth. In 1759 he made a “team” with people in it who were in a poorer social level:

– Singer Mátyás supervisor of the boats

Their main goal was that the Devil would get them 100.000 in gold. The bartender János Sperber wrote the contract with his own blood that includes that they committed themselves to the Devil who gives them the following:

István Seregély prepared really well. He told his friends that he made a black mirror in Vienna to call demons, but they said later that none of them ever saw this mirror. It was not the only “ritual object” of his. He was very proud of his knife made of deer bones with 9 crosses and 9 moons on it.

Clear instructions belong to the subjects: they had to put the mirror on the eyes of a dead man for 9 days and then take it off exactly at the time when they put it on it. They had to draw a circle around themselves with the knife that was used during the ritual and then they had to look into the mirror that was takes of the dead man’s eyes… And then he sees the hidden treasure that the Devil will bring to him after he put on the badge.

They sang Devil calling songs during their secret meetings that were held at István Seregély’s house in Újváros or at Mátyás Heffner’s house at Sziget. Once Tamás Haiczinger said that he trapped the Devil in a little jar.

The story has an interesting (but opposite) turn here because at this point, they needed a priest that could close the Devil into a blessed cup. After that they could give commands to the Devil and He would need to give them whatever they want, for example they could ask for gold, etc. Maybe the Devil was too clever since He would need to serve anybody who wore the badge…

They searched for a priest in Vienna, Bratislava and Magyaróvár but they could not find one. Maybe therefore they could not get the money. More than that, the people of this group stole each other’s money and spent it and then they sewed each other. Also Heffner stole a vestment so he could use that during the Devil calling.

István Seregély was well known and rich and he paid his friends so they would not tell on him and he would not need to go to the judge. However, the members of the “covenant” were sinful, old offenders and they would get into jail anyway, so they told on him.

According to the libel the nobleman had a lot on his list. He became friends with the Devil and this way he blasphemed God and he dishonored the catholic religion also. He dishonored it not only by calling the Devil but also by stopping Sperger who was Lutheran to become a Catholic. He was the one who figured out the plan and he owned ritualistic subjects.

If this is not enough, he had plans to help the Prussian king to go against Maria Theresa with the help of the Devil. He hoped for financial profit out of that. It was a surprise that the queen did not take it as a personal offense who approved the appeal against judgement at first. She maybe thought that the defendant was more ridiculous than dangerous.

Seregély – being a nobleman – got in front of the courthouse of the county that ordered him to pay 150 golden Forint of Körmöc in 1761. They had to build a statue of Saint Michael archangel out of that money at the Sziget where they used to call the Devil.

The statue was made in 1764 and it was not standing in the Sziget but on the Káptalandomb (Chapter Hill). We do not have proof of why it was put there but it is probably because of the earthquake in 1763 which scared the people to the point that their panic made them put it in a more God centered place.