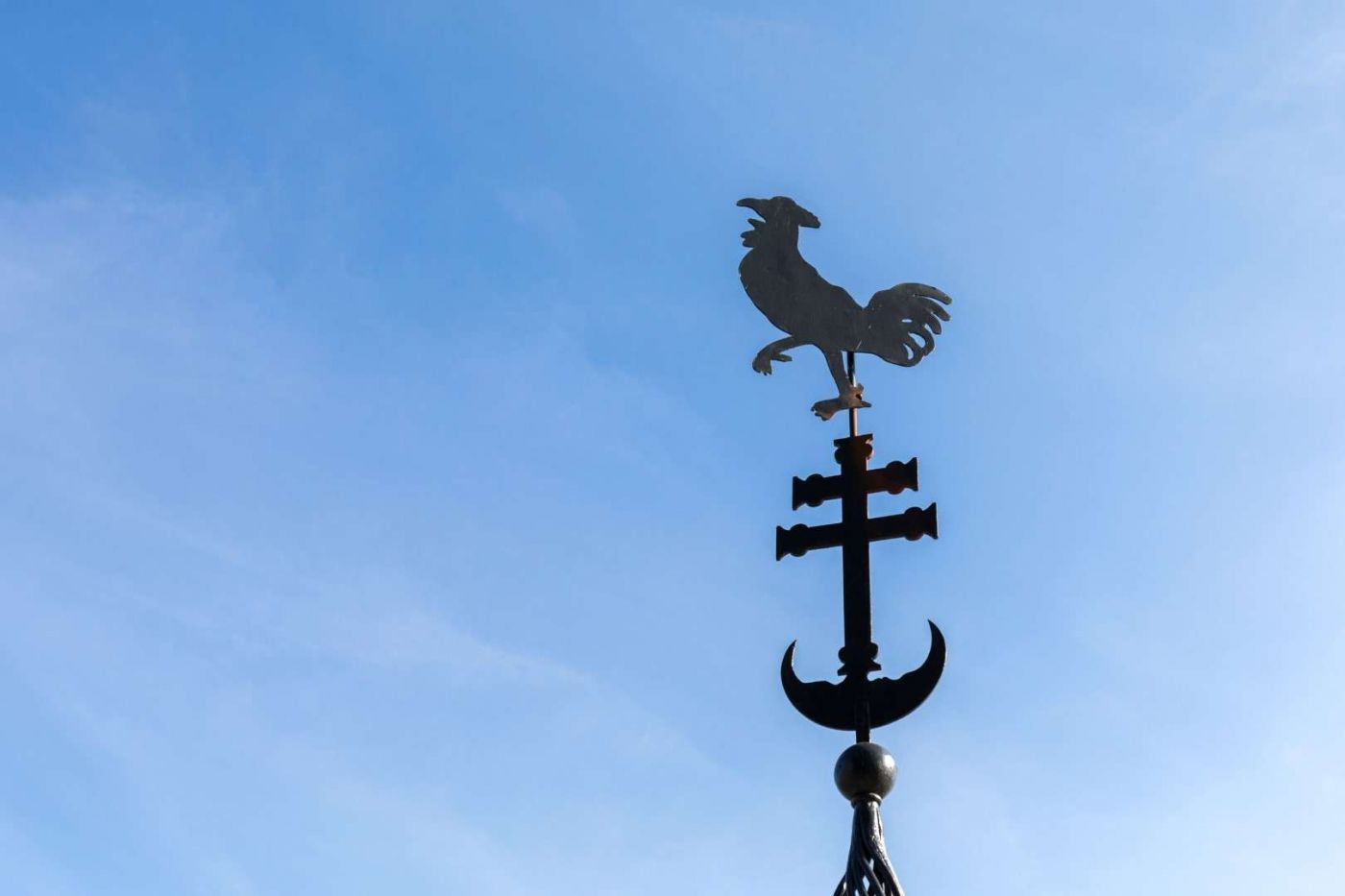 One of the oldest symbols in Győr is the crowing Iron Rooster. The oldest written documentation of it is from 1598 when Győr was freed from Turkish occupation.

The Turks put the iron rooster and the crescent moon on the bastion in the Dunakapu square as a display of their rule over the town after the Turkish troops captured Győr in 1594.

It is a well-known scene for every citizen of Győr when the ambitious and prideful Sinan (who was the leader of the Turkish troop) said: „The Hungarians will get back Győr when the iron rooster will begin to crow and the moon is going to be full under it”.

The smart and inventive soldiers of Győr just waited for the right time to fulfill the prophecy. Some of the Hungarian valiant soldiers dressed as Turkish soldiers and they went to the gate of Fehérvár with newly-discovered dynamite at the end of March in 1598 during the moonless night and that was the moment.

They had a bloody battle on the streets and janissaries nearly won the battle again when a young Hungarian soldier – or shoemaker servant who remembers now? – climbed up to the Danube bastion and he crowed. The Turkish soldiers looked up immediately and they saw that the rising sun made the moon crescent full. They did not need to see anything more since they were highly superstitious, and they ran away from Győr as fast as they could.

This story has heroes who have names besides the crowing iron rooster and shoemaker servant.

When Sinan’s troops got Győr under assault, the castle of Győr was one of the most modern and strongest castles. Ferdinand Hardegg armored the castle, he proved his efficiency when he won the battle against the pasha of Buda with Miklós Pálffy.

Mátyás archduke who was high in rank but low in talent came from south of Esztergom to Győr with his army to help to save the castle from the Turkish troops. When the Turkish troops attacked his unorganized and undisciplined army, Mátyás ran away with his army. Without his support – so the massacre would be ended also – Hardegg gave the castle to Sinan and the Turkish regime took over Győr. Somebody had to be blamed for losing this important strategic base, so Hardegg became the blame and he was executed.

We know from contemporary resources that the Turkish groups had a shortage of food and they raided and attacked bigger food suppliers. They had a guzzling life style and that lead to their doom. Pecsevi Ibrahim’s (Turkish story writer) words tell us how Miklós Pálffy and Adolf Schwarzenberg got back the town:

„The Turkish people gave their life for drinking, so none of them was sober and nobody was watching/guarding the walls and the gate guards did not sleep by the gates. If the leader of them said »this place needs to be guarded« then they just answered: »Győr is strong and has a famous name.« (…) One of the night Pálffy collected few thousands of footsoldier and he brought one or two thousands of troopers. They came and he brought a wooden canon what he hidden. He did not even show it to his own soldiers and they brought it to the gate of Győr.

Because of the neglect of our governors, the gates of the castle were closed but they did not pull up the drawbridge, either they closed and blocked it in another way. They came to the gate at midnight »Guard! Guard!« they shouted and the guard of the gate, a servant man woke up and popped his head out under the blanket and said »Who are you?« and during this they brought the wooden canons close by.

»We brought food from Pécs; and the enemy ran after us and reached us, we could barely get away from them; before they would get here, please open the gate quickly and take the food inside! «, they said. The boy answered: »I will go, and let the gate guards know and I will bring the keys.«

After this conversation they brought the canons close to castle gate and they began to shoot. When they broke the gate, then they went to the castle. The enemy was drunk and high of opium. They were just laying but when they heard what happened then they nearly pushed the Hungarians out but they were a lot and the Turkish people were drunk.

And this way, a strong castle got to be owned by the enemy of faith!”

Not many people know that a human face is on the crescent moon. The symbol used to be all the three things – double cross, moon and the rooster what were forged together as one later in the centuries – were painted colorfully and the original one was on the Dunakapu square until 1872 when it was moved to the town museum to preserve it.