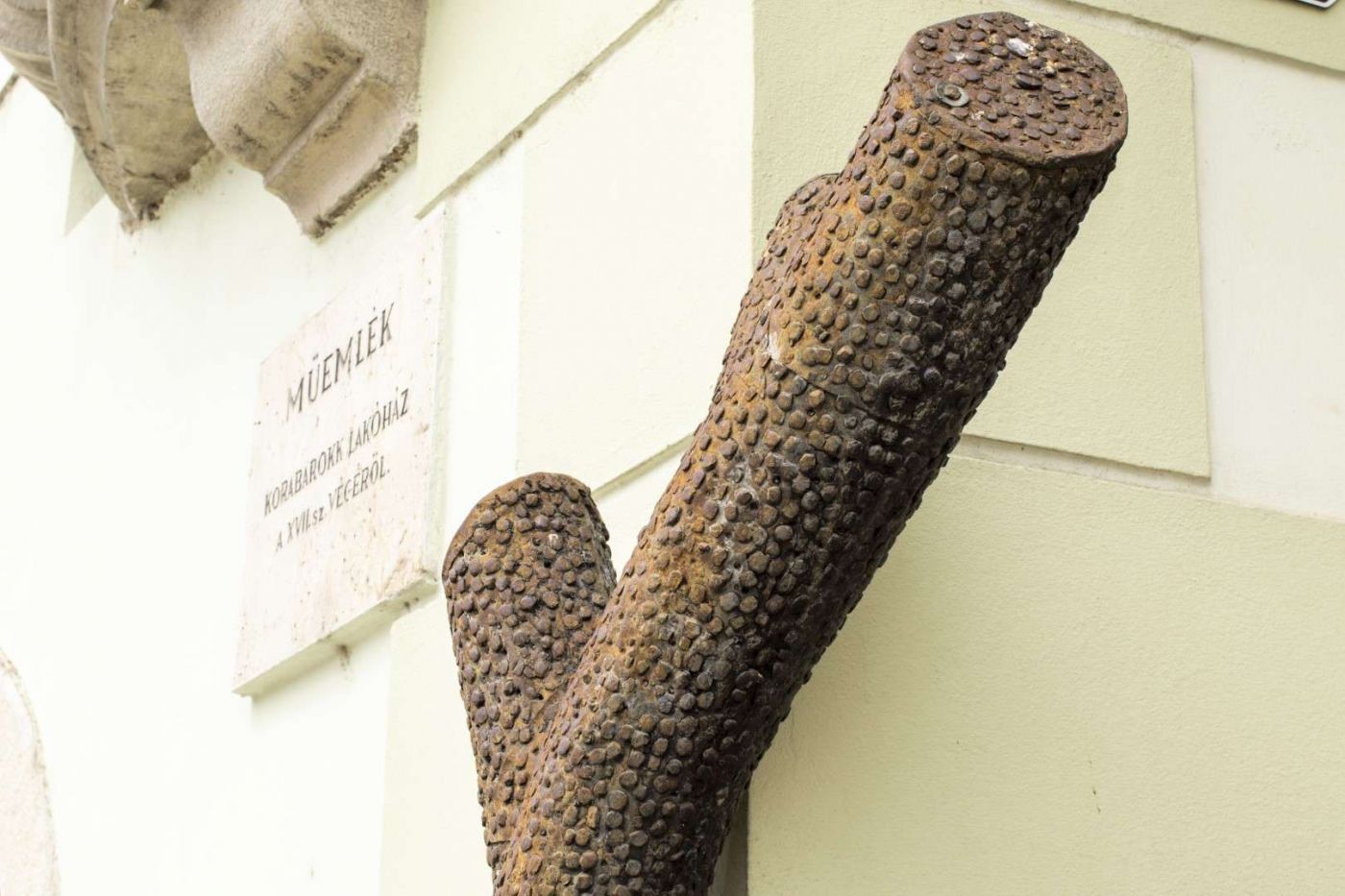 The Iron Stump or whatever you want

The house with the iron stump is one of the most unique and iconic buildings of our town. It has a narrow entrance and cylindrical shaped corner balcony. This building is at the Széchenyi Square.

It was owned by town magistrates in the 17th century and then a grocer (called Mátyás Zittrisch) bought it.

He proved that he was good with marketing because he made an iron stump at the front door of his store which was a replica of the Stock im Eisen in Vienna.

As we can see it worked really well, because this building has been the talk of the town ever since and it has become a symbol of Győr. According to town legend, traveling young craftsmen hit a nail into this stump as a memory of the time they had spent in the city before they went to abroad to get more work experience.

It is more likely, however, that those nails were already in the stump when Mátyás Zittrisch put it by the corner of the building.

The main character of this story is a poor locksmith servant who stole a really beautiful, decorated iron nail from his master. It was supposed to be used to the hunt castle of Saint Leopold (who was an Austrian prince and also a patron saint of Austria) in the forest of Vienna.

The young man got lost in the forest and somehow he kept coming back to the same tree with a unique stump.

He felt sorry for what he had done, but he was not brave enough to tell the truth and he did not want to give it back and keep it either, so he hit that nail into the tree.

Then the Devil appeared to him and offered to help him make nails and a locker to protect this stump from any axes or saw. He accepted the Devil’s offer and he made a beautiful and complicated lock. Nobody could open it, only him. He became a really rich and well known master of his work, so he hit more nails into the tree until it got covered by them. He sawed the upper part of the tree, so only a stump was left with the iron bark. Then he made a lock that nobody could open.

His life was good and happy, but he felt guilty that he made a deal with the Devil and he was afraid that the Devil would appear at any time to ask for what he owes to him. So he went to church every morning to listen to sermons that protected him from the Devil for 24 hours.

But it is not as easy to trick the Devil. One day when he was late to church because he drank too much wine, the Devil found him and twisted his neck.

The most talented locksmiths came from all over the world but they could not open the lock of the iron stump. Vienna started to grow so large to the point that this tree which was in the middle of a forest was now in the city. So every locksmith who came that way hit another nail for the memory of the famous unlucky locksmith.