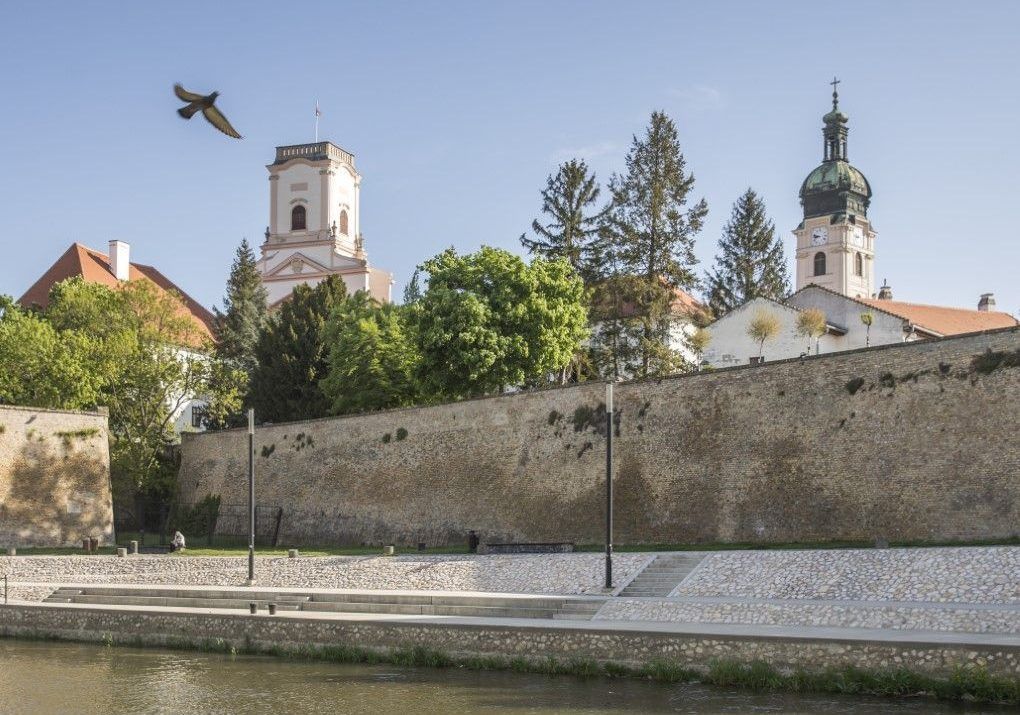 The Bishop’s castle is on the northwest side of Chapter Hill and is the home of the bishop of Győr.

The county and the official residence of the bishop founded by Saint Stephen were not the first authority base here. The castrum of the Arrabona camp was built here according to Roman archaeological finds.

The archeological excavations debunked legends about the treasury and escape tunnels. It became clear that it was the remains of the resident tower that was built in around 1250 by Omodé bishop and became part of the castle’s north wing.

The first floor’s stairway of this resident tower is still mostly undamaged. The entrance was 8 meters deeper than the level of the yard now. It was just a few meters above of the level (that time’s level) of the Danube at the side of the hill. You could get to the gate by climbing a ladder and only one person could go through at a time. This was part of the defense strategy against attacks during that time.

And how could the entrance be this deep down? It was burned down during a big fire that destroyed the buildings of Chapter Hill in 1529. This is when they surrounded the castle with star fort (Italian bastions) where they used 6-8 meter tall banks.

The first floor section of the Bishop Castle’s angled tower (where we can enjoy a 360° beautiful view ) is from the 14th century while the upper ones are from the 18thcentury. A gothic chapel joining to the south part of the bastion (from the side on Bécsi square), was built in 1487 by the request of bishop Orbán Nagylucsei. Since then it has been the home chapel of the bishop.

The gate of the sturdy and stumpy tower leads to the castle yard through a gothic and domed gateway with sedilias. This little hidden corner with the beautiful forged iron grid is a new favorite spot for photos in Győr.

The Bishop Castle opened its gates for visitors not long ago. Individually it cannot be visited, but you may sign up ahead for the times when they have tours. It is an interesting tour through the rooms and the times when the leaders of the church lived here in Győr and how they lived both in the old times and today.

The guided tour ends at the garden of the castle which is surrounded by walls where visitors enjoy a beautiful panoramic view of the rivers and Radó Island. The garden was a part of the fortress  system. This was the Castle Bastion. This bastion and another named Sforza Half bastion at the side of Bécsi square survived the fortress explosions of Napoleon’s army in 1809. The fount that is in the garden and covered and walled in with bricks is from the 16th century. It is the oldest known fount of Bishop Castle.