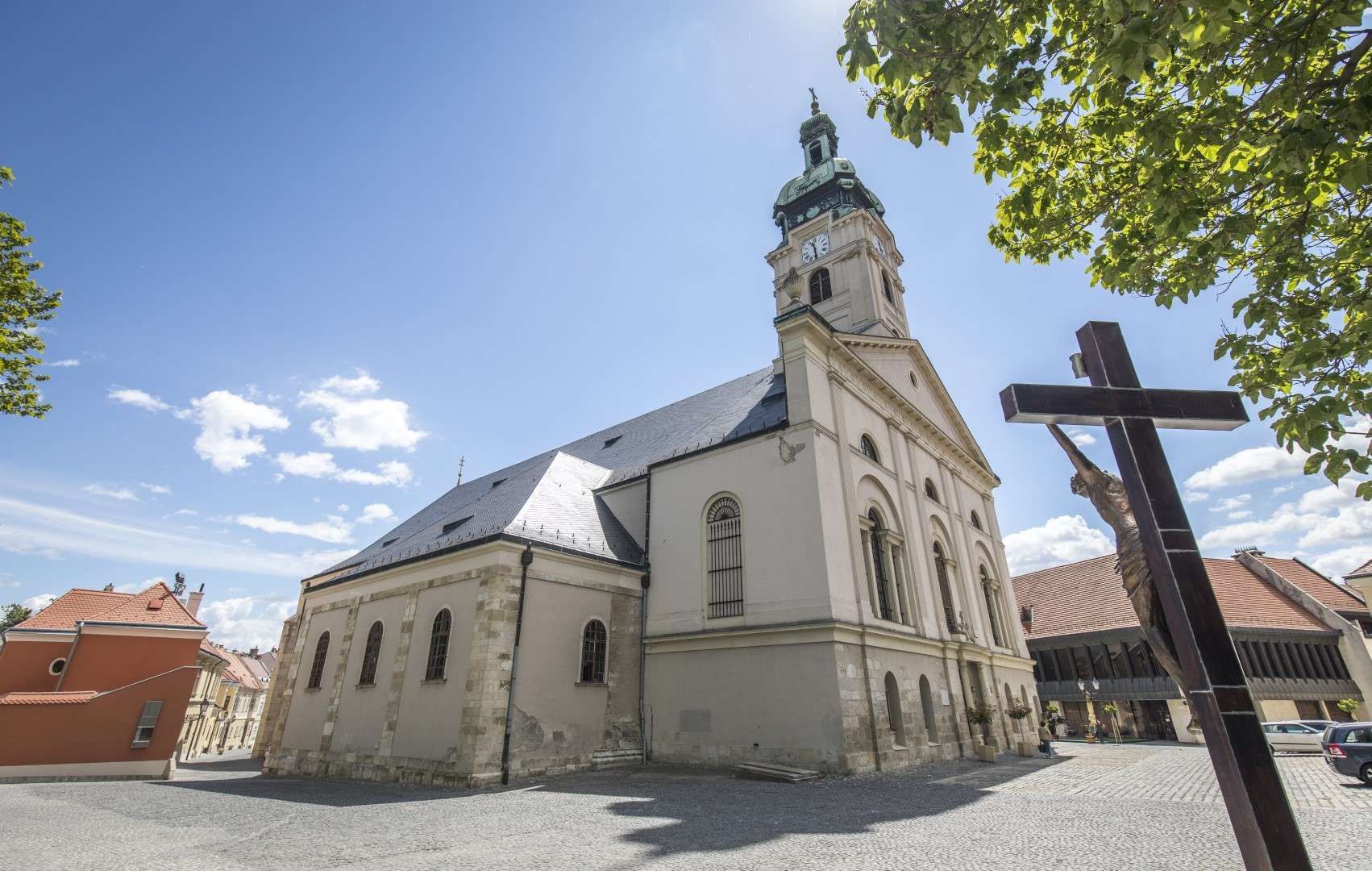 The most significant church of Saint Stephen King’s foundation of Győr’s episcopate that was built in Roman style in the 11th century. Unfortunately we cannot see too much remaining of that first building. Large fires and the Tartars destroyed it to the point that it had to be rebuilt. This is when it was completed with the undercroft.

The building alignment follows the standard West -East pattern as was usual for Christian churches during the Middle Ages. The frontispiece is always facing towards the coming last judgement, looking towards the setting sun in the west. The oldest part of the Cathedral is the gothic styled piers and windows in the side aisle.

The oldest example of that is the Héderváry Chapel at the south side from 1404. It was the home of the Herm of Saint Ladislaus, which is the third most important national relic. The name of the chapel was given after János Héderváry bishop who built it. It is worth looking up at the beautiful stained glass of the chapel that was made by Lili Árkayné Sztehlo (glass artist) and László Hefter (glass sculptor from Pannonhalma). We can see the Saints of the Árpád dynasty.

It was a Gothic cathedral in the 1480s that court historians of King Matias praised. Unfortunately this good time ended in 1529 with the Turkish appearance in the town and difficult times started for the Cathedral. One of the towers collapsed, the other got struck by lighting and the tragedy continued when it was used as an army storage room and the Turkish used it as a fortress and barn. The north aisle that is towards the Danube was filled with dirt and the windows were used as cannon emplacements. The Héderváry chapel served as an ammunition storage and the crypt served as a prison.

In the middle of the 17th century bishop György Draskovics gave the assignment to Giovanni Battista Rava, an Italian architect, to rebuild the building in baroque style. Four decades later, Bishop György Széchenyi built the current tower then Italian painters and sculptors came from Vienna and the baroque altars were made by the beginning of the 18th century.

The style of the interior was made at the end of the 18th century during the time of Bishop Ferenc Zichy. This is when the ceiling frescos were made by Franz Anton Maulbertsch (an Austrian painter) and his students. The bishop throne was a gift from Mary Theresa who was a good friend of Bishop Ferenc Zichy. This bishop throne is located on the left side of the sanctuary. The classicistic building we can see today was built for functional reasons in 1823. Its job was to support the tower that was in poor condition.

The bronze gate of the main entrance with the iron grid doors were made by Schima Bandi. We can see his work at many other churches in Győr. The most well-known of his works is the Golden Ship trade sign on Jedlik Ányos street that is a bronze time capsule coated with gold.

Pope John Paul II. gave the basilica minor rank to the Cathedral during his visit in 1996 that gives home to three important sacral treasures. The Weeping Madonna painting can be seen in the north aisle at the altar. It was a gift from Ireland in the middle of the 17th century and is the subject of one of the town’s major legends. The herm of Saint Ladislaus, previously mentioned, can be seen at the Saint Ladislaus Visitor Center due to renovation work. The tomb of the Blessed Bishop Vilmos Apor can be found in the Héderváry Chapel also. It is a modern day shrine among Catholics.