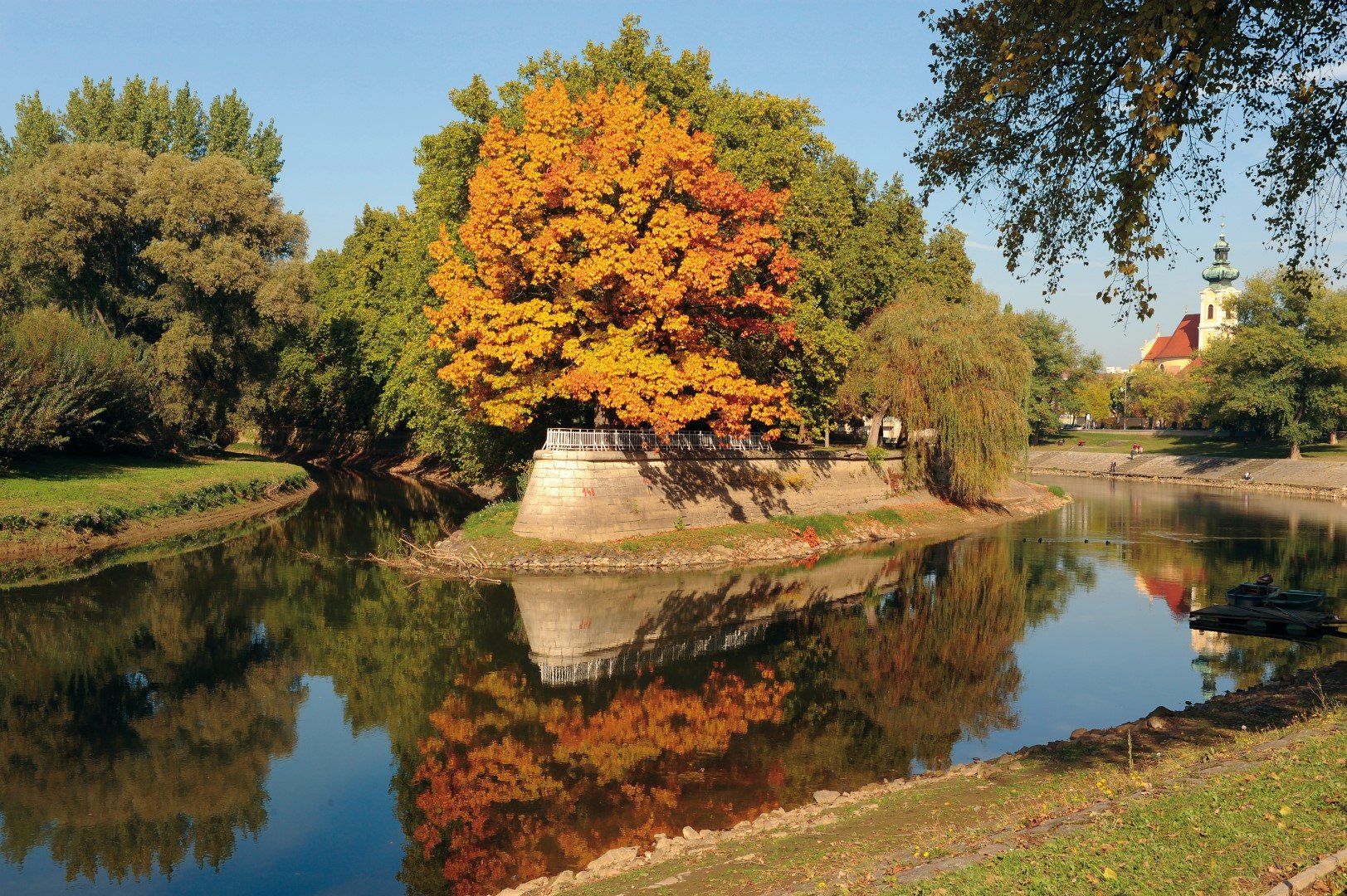 One of the most romantic corners in downtown Győr. It is a 19.512 m2 island, surrounded by the Rába river and is connected with downtown and Újváros by bridge. This bridge is called Rába double bridge and cuts the island in half from east to west. Where the two bridges meet stands a monument and memorial in honor of the men from Győr who died during World War I. It was built in 1938. The Kisfaludy statue was also here from 1892-1920, but now it is located at the Bécsi kapu Square.

Not too many people know that this little green island in the heart of downtown and near the mouth of Rába river is not a natural formation. It is not on the print of the Győr Castle’s battle. The advance guard bastion was built here in 1660-1670 from the burnt bricks. The walls of these bastions can be clearly seen on the western and south corner of the island.

As we walk by the end of the boardwalk, we pass the monument of Károly Sajó who was born in Győr. He was one of the less famous scientists in our town, but was one of the first Hungarian entomologists. He did important research in the area of agriculture and gardening. He figured out the mildew and the Moroccan locust control. He was the pioneer of ecology and environmental protection also.

The North side of the island was purchased by the City Council in 1836, with the purpose of making the city more beautiful and give the citizens a most pleasurable place for strolling. Everybody called the area Parade Square and this was its official name too. Today it is named from Kálmán Radó, former director of The Association For The Regulation Of The Rába River.

On the North side of the island we can find a smaller pedestrian bridge above the Rába river where it merges into the Mosoni-Danube. We can see that closer when we walk across the bridge, then turn right and we walk around the peninsula at the confluence of the rivers. We can continue our walk at the bank of the Mosoni-Danube for about 1 kilometer until the confluence of the Rábca.

The Association For The Regulation Of The Rába River built the first pedestrian bridge in 1912 but it collapsed in 1963 due to a harsh, icy winter.

The first iron constructed bridge from the Bécsi kapu Square to the island was built in 1894 and was similar to the Kossuth bridge at the Dunakapu square. Sadly, however, this bridge was bombed with the others at the end of World War II and a new one was built at the end of the 1960s. Before any of the bridges existed, people were transferred to the island and back on boats. Just imagine the view of little boats and ladies in colorful dresses with umbrellas and men dressed in dressed suits who were heading to one of the plays of the stone theater.

The first theater of Győr

Not too many people know that the first stone theater of the countryside was built at its south side in 1798. It was torn down along with a restaurant in 1933. The first wooden theater of Győr opened its doors 30 years ago for its visitors, so it was the first Hungarian theater (if we do not count the one in Bratislava).

The stone theater was built by József Reinpacher. It looked like a neoclassical, Greek church from the outside. This building has had a rough journey.  The town bought it at the beginning of the 19thcentury. They moved into the theater a few years later during the occupation of the town by Napoleon’s army. They used it as a barrack and a barn. It was renovated in 1839 but it flooded at least every second year because of its location.

The wooden frame Kioszk was opened in 1867 at the place of the today’s Arany Szarvas Inn and Restaurant. It had a huge patio and closed building and it was the summer music hall for the people in Győr. It was open from 5 a.m. until 11 p.m.. It offered breakfast in the morning, coffee, snacks, ice-cream, iced coffee and other cool beverages, and “at least twice they had martial and gypsy music every week” – according to an advertisement in the Bulletin of Győr from 1867. According to the old records it was busier than the Széchenyi square.

As the town got bigger, the need grew also. As the Bulletin of Győr said: it became “uncomfortable and insufficient”, so in 1917 a bigger Biedermeier styled kiosk was built by Imre Szőke that was not just a simple coffee house. The upper floor was the home of the Casino – its location was a main question for a long time in the town – but also the Kiosk had many meeting places, game rooms, pool and reading rooms, so it was an entertaining place both day and night.

This building was not spared during World War II. After it was rebuilt it became a restaurant again then it had many different cultural functions such as it was the home of the Kisfaludy Theater’s plays and the County Library also. The condition preservation was done wrong and it was in such bad condition that by 1970 it had to be torn down by the Soviets.

The land that gives home to the open-air pool where we can find an obelisk that is the Cziráky monument. It was built in 1913 by the The Association For The Regulation Of The Rába River. It was made as a memorial of earl Béla Cziráky’s work by the association two years before he died. He was the president of the association and he lead the regulation of the Rába river for 15 years. It is mentioned as the “Eifel tower of Győr” in the article of the Transdanubian Newspaper. It was planned by Szilárd Zielinszky and it was accomplished by Péter Melocco. The sculpting part – included the bust of the Cziráky earl also – was made by Adorján Horváth.