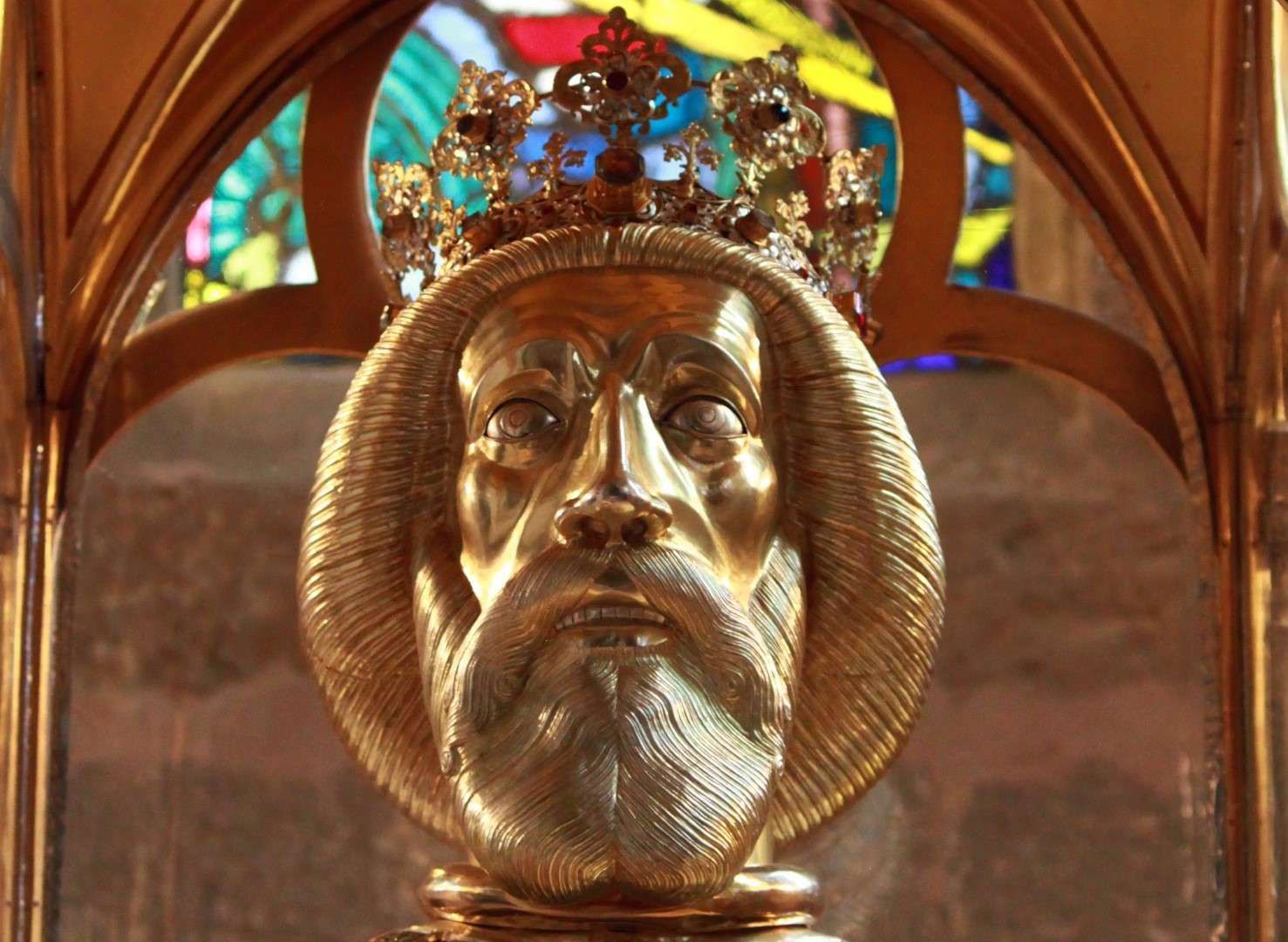 The herm of Saint Ladislaus

The herm means head-reliquary. In this case, it holds Saint Ladislaus King’s sculpture and we definitely can say that it is the most valuable piece of Hungarian metalsmithing.

The head of the herm is made of gilded, embossed silver. The sculpted reliquary was put inside, in a silver case. The work on the shoulder and chest was crafted with the wire enamel technique. This technique is from 14th century of Byzantium which from there spread to other parts of Europe thanks to Venice. And what is the wire enamel?

Experts have argued a lot about the makers of the herm. Some think it was made by Márton Kolozsvári and György Kolozsvári  and portrait of III. Béla is seen in the herm by that group. Saint Ladislaus was blessed during III. Béla’s reign. The others think that the head part was made around the 12th-13thcentury  at Dénes master’s workshop.

We know as following the old traditions his grave was opened and his head and arms were put in separated shrines so they could make them religious relics before he became blessed in 1192. The next time it is mentioned in records was in 1273 that his sculpture was kept in the shrine in the Cathedral of Nagyvárad where Saint Ladislaus was buried. They used it at the vows. According to one of King Zsigmond’s certificates the herm was destroyed in the great fire of 1406 but the relic survived it. This is when the new herm was made with the technique mentioned earlier between 1406 and 1443. We know this because they held the herm under the tower of the cathedral in Nagyvárad. This tower collapsed but the herm did not get damaged at all.

According to legend Saint Ladislaus’ grave was robbed in 1565 but Bishop Demeter Náprági was able to get the shrine back. When he needed to leave Várad because of the persecution of the catholic people, he took the shrine with him to Gyulafehérvár, Bratislava and in 1607 to Győr. Not too long after Bishop Walter Lynch arrived in Győr and brought the Weeping Madonna painting that wept blood.

Bishop Demeter restored it in Prague. This is when the roller neck and the neck ring got on it that we can see today and this is when its gothic crown was changed. The crown is decorated with Czech grenades and glass and uncolored quartz insets.

Knight King’s personality cult was not foreign for the citizens of Győr before the arrival of Demeter Náprági. Győr town looks at the Saint King as its personal patron since that moment that Győr gave home to this national relic. The story of the earthquake in 1763 belongs  to it also. Thanks to that Győr has a tradition since then and the town got a new legend that you can read about here.

They opened the herm for 4 days in 2011. The scientists (doctors, anthropologists and boffins) started a research project to get answers for the following questions during this 4 days: is there a sculpt relic in the herm? Is it a full sculpt or just pieces of it? And does this relic really belong to the Knight King?

The lower jaw and most of his teeth were missing and also little pieces of his sculpture, likely because others took small parts of this relic before as well. János Simon bishop of Győr who became diocesan bishop of Esztergom in 1867 took a tooth of Saint Ladislaus that is kept in a shrine in the Basilica of Esztergom. The shrine was made in Vienna. A little piece of the sculpt and one of the remaining 3 teeth were taken to do some research. The first fact that was figured out that Saint Ladislaus was totally healthy when he died.

The anthropology examination made sure that the herm holds the sculpture of Saint Ladislaus. We can see the colored part on the top of the sculpt and that matches the  openings of the shrine that is a strong proof that the original sculpt was kept in it for centuries. Also it shows that it is Saint Ladislaus’ sculpt that it has rugged features of a man who was between 45-55 years old that is shown on the face reconstruction. This face reconstruction is very similar to the one that was made by the sculpt of the III. Béla.